The Public Meeting arranged by the “Why This Field” campaign group was held in the Civic Hall on a stiflingly hot summer evening last Friday the 17th June.

Attended by Alan Salt, headmaster of Kevicc, Jim Lodge, governor of Kevicc, Lisa Smallridge and Alice Widger of the WTF campaign and chaired by Caroline Voaden and Paul Wesley on behalf of the WTF Campaign, the event was extremely well attended by around 130 local people.

Headmaster Alan Salt opened with an overview of the situation that Keviccs are selling sections of land in order to change the structure of the School and make much needed improvements to the school He outlined details of the plan and consultation to approach the Secretary of State for approval. Mr Salt revealed that Devon County Council assesed the school in 2019 and that it needed 3.9 million pounds to operate the buildings safely.  He also explained that the governing body must have all proposals available to them before making any decisions and it is “incorrect to claim that the governors have decided to sell the land to developers.”  He said that the timescale for a decision is set for Autumn because they would like to start improvement works in summer 2023.

Lisa Smallridge made a short opening statement about the passion she feels for the space stating  – “five generations of my family have spent time in that field and I’m absolutley teriffied that by grandchildren might not see the same”  and that  “we just cannot lose it for housing ” to much clapping and cheering in the hall. 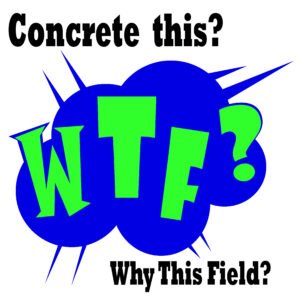 School governor Jim Lodge was then invited to address the meeting and had barely begun when his assertion that “…we don’t just need some money, we need as much as we possibly can. That is our responsibility under statutary guidance to maximise the land and the value we get from the site.” was interupted from the audience with “That’s not true!”. This appeared to derail Mr Lodges’ presentation who suggested we proceed to questions from the meeting.

A question was asked about how the school becoming an Academy affects the sale. Alan Salt responded that the change will generate “…no new money…there is no extra funding”

Next it was asked why the original Kevicc consultation was only 6 weeks when government advice is 3 to 6 months and why it was conducted during school holidays? Alan Salt responded that the consultation was not during holidays except the last three days and that he was advised that 6 weeks is usual practise and was unaware of a requirement for the longer period.

Dr Kevin Burchell (research fellow University of Birmingham) was asked to present on the WTF survey and the original Public consultation: “When I looked at the report I a saw why another is needed” he suggested that it was “really flawed” and used “bad method” generating only 99 reponses to which Kevicc claimed indicated ‘widespread support’ in the town for development which misrepresents the reality. Dr Burchell explained his own WTF survey, with clearer, simpler questions and had been live for just 2 weeks had received 447 responses. Dr Burchell revealed the interim findings that 83% strongly agreed and 7% aqreed supporting the TTC proposal (90%). For the question asking about selling the Lower Field to developers, only 1% strongly agreed and 3% agreed. He asked Mr Salt, Mr Lodge and the governors to please take the survey seriously.

The next question from the meeting asked about “Best Value” and also implored that aside from the monetary aspect of the situation, wouldn’t it be beneficial to the school just from a PR point of view? Jim Lodge once again asserted that  “To be completely clear, [best value] is primarily cash” which drew some groans from the room prompting Caroline Voaden to assert that the decision “doesn’t have to be decided on money.” – The ‘Best Value’ question re-appeared many times throughout the meeting but Mr Salt and Mr Lodge remained firm on this point and suggested that this definition difference may be due to differing lawyers on opposing sides of the discussion.

Mr Salt alluded that the financial value of the lower field might be higher as part of all the land available as opposed to sold as a single space. In response to this Ms Voaden drew loud cheers stating “The governors might sell all their land but The lower field is where the developers will want to build houses because it’s more beneficial to their back-pocket. Why should we do anything in this town that puts more money in the back pockets of developers!” to which Mr Salt assured the meeting that no decision has yet been made by the governors and they have to assess all the offers together. 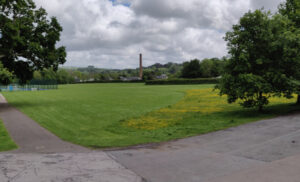 The lower field in the foreground

Devon County Councillor Jacqi Hodgson stood up to point out that the petition created by Alice Widger was officially handed over to the Devon County Council when it had over a thousand signatures in less than a week, to which D.C.C. responded that they would support the T T C proposal. She also went on to say she was in communication with Anthony Mangnall MP and that he is very clear that the town feel very strongly about this and will be talking to the Secretary of State for Education in the next few weeks and make clear the situation. Caroline Voaden then asked people to write directly to Anthony Mangnall who in another recent newspaper article stated “Our green spaces are sacred and not to be bulldozed for profit”

Questions were also raised about the legality of the sale and following a statement from South Hams District Councillor John Birch regarding financial confusion over actual ownership, responsibility and use of land. He enquired about this confusion and whether it was the governors or the trustees who are accountable for the decisions. He also asked why there appear to be descrepancies in the published figures Dart Valley Learning Trust.  Alan Salt explained that there are “technical reasons” why a “charitable trusts of this nature are not allowed to list value of their assets as an asset” and re-iterated that whilst the land is owned in trust by the D.V.L.T., it is the Board of governors (of which there are 10) who make the final decision and that goes to the trustees of DVLT for approval.

Caroline Voaden ended by summing up with  “We have a responsibility to ourselves and our future community for our children to play on that field and access that river and the magic we can create with the elmhirst building is something we can be really proud of for generations to come”, continuing, “Totnes is a really special place where we can do things differently – it’s got to be about more than money” prompting a very loud and passionate response from the meeting.

Editor Note: A video recording was made at the meeting but we however we failed to advise Mr Salt in advance and he refused permission for publication for fear that it would be modified or adjusted to take statements out of context. A recording was used to compile this report.

RURAL IRELAND. 1981. A quiet, neglected girl is sent away from her dysfunctional family to live with foster parents for the summer. She blossoms in their care, but in this house where there are meant to be no secrets, she discovers one.

sing in the summer Ever wan

sing in the summer

Ever wanted to sing? Everyone can do it!Do you enjoy contemporary, pop, folk, inspirational, show tunes, gospel and much more?

There’s a new singing group for Totnes, Bridgetown and beyond. No auditions, no need to have ever sung in a group before, just come and enjoy singing together.

The first try–out sessions over the summer are free!

Totnes based singer-songwriter LILY started her musical journey in her early teens with JAMMING STATION – a wonderful artistic hub of creativity which empowers young people through music.

The road she has travelled since has brought her to the release of her first single ‘PENNY’. To mark this release, she will be performing with a full band on her favourite stage here at The Barrel House Ballroom.

Blending jazz and neo-soul into reflective songs with catchy grooves and melodious instrumentation, Lily Mackay and guitarist Rowland O’Connor are ready to bring you in on the run-up to the release of their first EP later in the year.