The town of Totnes is a tourism magnet and quite rightly so. It’s beautiful. But the one thing that crops up over and over again is just how un-friendly it is to those valuable visitors. We have a high street where the car is king and that is so obviously wrong that this subject will continue to return until the problem is resolved. The improvement to widen the pavement just above the west gate clock tower a few years back, was resisted by some at the time, however few would argue now to return it to its treacherous narrow past. It’s a huge improvement.

It’s all about getting together.

The one way up debacle was a well meaning idea that was badly thought out and implemented and as such, failed. Not necessarily because it was completely wrong and partially because it was imposed on the town with very little consultation that caused entrenched partisan attitudes. The public money (more than £100,000) wasted on legal action was a disaster. It doesn’t take a leap of imagination to conclude that it helped create a damagingly negative attitude toward the town up at Follaton House. Importantly, a report of South Hams Highways and Traffic Orders Committee in November 2012 states “…a review of casualty collisions between 1 January 2009 and 31 December 2011 has revealed that another seven injury collisions have been reported by the Police in that period with one of these classed as serious. Of the seven collisions reported over this period, 4 of the drivers failed to stop”. Totnes High Street is quite a dangerous place.

So what is to be done?

Almost everyone has an opinion. So the Totnes Pulse aims to help clarify the problem.  We intend to consult with everyone and push for a solution. It’s all about getting together. So we will be asking businesses, tourists, local shoppers, residents and councillors how we can move forward. If the market square is the heart, the high street is a vital artery that breathes life into a town that people want to visit and we want to live in. The centre of town has to be a social space – not the polluted, traffic dodging mess it is right now. It simply isn’t good enough and what’s more – our future depends on it.

A report by American based group SPUR indicated 7 things to do for a perfect high street:

1. Create fine-grained pedestrian circulation.
In other words, make sure paving and guided routes are made for people to follow – Not really a problem for such a small space like Totnes. NOT VERY RELEVANT FOR US
2. Orient buildings to streets.
Also not relevant here because all our shops are already looking directly onto the High Street and the buildings aren’t being moved any time soon… – FILE UNDER IGNORE
3. Organize uses to support public activity
The best places have bustling centres where people want to spend time. A fountain, a play area. – REQUIRES INVESTMENT – MEDIUM EXPENSE
4. Place parking behind or below buildings
the report strongly recommends putting parking spaces underground or behind a building.- REQUIRES INVESTMENT – HIGH EXPENSE
5. Address the human scale with building and landscape details
Buildings may loom over pedestrians,but not here in Totnes – As far as we know, SHDC planning haven’t allowed a skyscraper to be built. – IGNORE
6. Provide clear, continuous pedestrian access 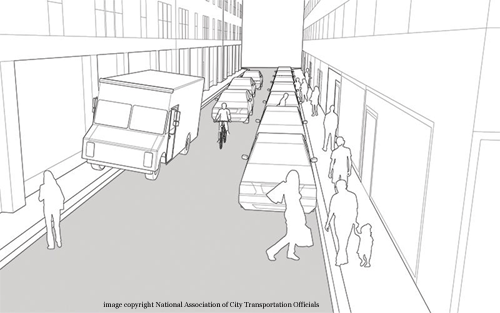 It’s almost universally accepted that pedestrians should have priority over cars – Arranging mild chicanes with street furniture like planters and benches can update the street and change the perception of who is in charge, cars or people. – RELATIVELY INEXPENSIVE, VERY EFFECTIVE
7. Build complete streets
Over the last 100 years high streets have been designed around cars. This needs to change. Encouraging places for people to get a cup of coffee, read the newspaper, or have an outdoor meeting next to a fountain  can go a long way to enriching the town. If the roadway and pavements were level, the space would become more open and much less linear. People would gather more and traffic discouraged from racing through. VERY EXPENSIVE, VERY EFFECTIVE 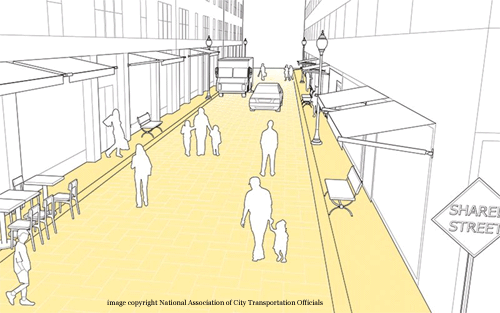 What can be done?

Being realistic, it seems Option 6, could be implemented relatively cheaply and quickly. Large planters with foliage, flowers and artwork need not be difficult to arrange and would change the way the High Street works immediately without preventing deliveries to shops and other essential traffic. The difficulties would be: general objection to change, upkeep of the planting, positioning and design choices. Option 7 – leveling the streets would be the ideal for humanising the area. The space directly in front of St Mary’s Church is a successful example of creating a people orientated area. The cost and disruption however would be very high and with council budgets currently empty, it’s unlikely Totnes will see this level of investment for quite a while.

10 comments for “Humanising the High Street”

Curious about the art of mediation but don’t know where to begin? Join our comprehensive Fundamentals of Meditation Online Course, guided by two

Curious about the art of mediation but don’t know where to begin?

This course is ideal for complete beginners and also experienced meditators who want to expand and develop their meditation practice.

You will learn the ABCs of meditation, including:

1. why we meditate;
2. classical meditation postures;
3. the practicalities of how to meditate.

Together, we will explore four meditation techniques from different spiritual traditions. From here, you’ll be able to see what style resonates with you most.

We also offer three guided group meditations sessions per week to help you find depth and stability in each meditation.

To find out more and to register, go to: https://kalyanyoga.com/online-meditation-course/

3 Daft Monkeys will be celebrating an unbelievable 20 years of musical adventures, and would love to celebrate with you. With a fiery helter-skelter

3 Daft Monkeys will be celebrating an unbelievable 20 years of musical adventures, and would love to celebrate with you.

With a fiery helter-skelter blend of influences from East and West, 3 Daft Monkeys inject a unique wildness into their music, producing a symphonious cacophony of styles, Silvery vocal melodies soar above percussive global beats and rhythms, while passionate fiddle-driven tunes weave around animated guitar and bass, all presented with outstanding musicianship in their famously theatrical live performances.

This multi-award-winning live act continues to deliver dynamic, rampageous, powerful
performances of their completely original songs with an endless energy and enthusiasm! With years of International festival experience in hand, 3 Daft Monkeys certainly know how to work a festival crowd, and are guaranteed to whip an audience into a frenzy of emotions with every performance.

The band will be touring in 2020 with their ultimate ‘best of’ set list, voted for by their dedicated fans, covering all their most popular songs both new and old, with an accompanying brand new ‘live’ album and merchandise.
3 Daft Monkeys have been personally invited to play live sessions on both the Bob Harris, and Mark Radcliffe BBC Radio 2 shows, with Mark Radcliffe hailing their live show as one of his “Highlights of Glastonbury”

“One of my favourite festival moments ever” (Mike Harding BBC2)

“One of the hardest-working, best lyric-writing, most joyful, danceable bands known to the
universe!” (Green Gathering)

“The musicianship- the virtuosity, the song craft, the arrangement is simply astonishing” (Spiral Earth)