Sunday evening (4/11/18) in Totnes brought over 100 people to ‘Listen, Speak, Plan’ – an event organized by Frack Free Totnes to welcome back Rich Loizou, one of the three anti-fracking protectors recently released from prison. 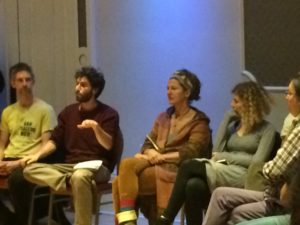 To a packed room at the Seven Stars Hotel, Rich, who lives near Totnes, spoke of his experience in prison and why he, and the other Frack Free Four, as the group became known, took non-violent direct action (NVDA) last year.

The protest, in July 2017, involved Rich and three others climbing up onto four lorries to delay equipment being delivered to the Preston New Road fracking site in Lancashire. They stayed there a total of 99 hours, and three of the four men were jailed on 26 September 2018 for 15 and 16 months after being found guilty of public nuisance. Julian, the fourth man, who lives in Torquay and was also at the Totnes meeting on Sunday night, has been held on remand, so was released after the trial. Rich spent three weeks in prison before being released on two-year conditional discharges, when the Lord Chief Justice quashed their jail sentences for being ‘manifestly excessive’.

Also speaking at the event was co-founder of Frack Free Totnes, Dr. Larch Maxey, who has spent the last 25 years studying climate change and campaigning across a range of organisations. Dr. Maxey spoke of the escalating public pressure that’s increased over the last few months including a national call for civil disobedience by the Extinction Rebellion movement, which has gained massive support following its Declaration of Rebellion on 31st October in Parliament Square.

Over 1000 people blocked traffic around Parliament Square for hours as they listened to talks by George Monbiot, Southwest MEP Molly Scott Cato, and Greta Thunberg, the 15 year old Swedish schoolgirl who founded the global #StrikeonFridays movement. Extinction Rebellion has begun training and mobilizing thousands of people across the UK, with 3000 people willing to get arrested and 300 ready to go to prison. Thousands are expected in London for Rebellion Day on Saturday November 17th with coaches leaving from Totnes and across the South West.

Dr. Maxey explained, “With the latest IPCC report saying we have only 12 years left to limit climate change catastrophe, we know we’re at a critical point in history, with the responsibility for radical action upon our shoulders. How do we generate the political will? Extinction Rebellion. When ordinary people take peaceful direct action research shows it is the most effective method of social change –  think of the civil rights movement and the suffragettes. If the Frack Free Four changed the national conversation about fracking, Extinction Rebellion will not only change the conversation about climate change, it could be our best chance of stopping both fracking and runaway climate change. The time is now. We must take action.” 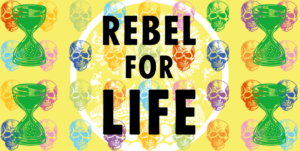 It was an energized, enlivening evening, with plenty of passionate debate and discussion between local Totnesians, including input from Pruw Boswell, former mayor of Totnes. Boswell spoke about how this would be an opportunity again for Totnes to step up and demonstrate the forward-thinking approach that had made them pioneers. “People might have thought at the time that Transition Towns was a crazy idea but look at the impact and outreach it’s had all over the world.” said Boswell. “Totnes now has another chance to step up and show courageous leadership with Extinction Rebellion.” 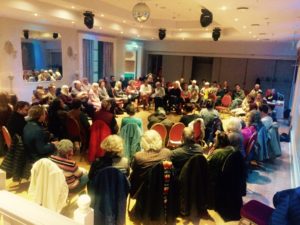 There will be a Totnes meeting of the Extinction Rebellion on Wednesday 7/11/18 at 7pm at the Seven Stars. This will be an opportunity to get involved and plan actions at a local and national level. Coaches are also being organized for the big day of action in London on the 17th

See Also: Report on the march through Totnes in support of the then imprisoned ant-fracking protesters https://www.totnespulse.co.uk/anti-fracking-march/

1 comment for “Totnes to Join National Rebellion for Climate Action”