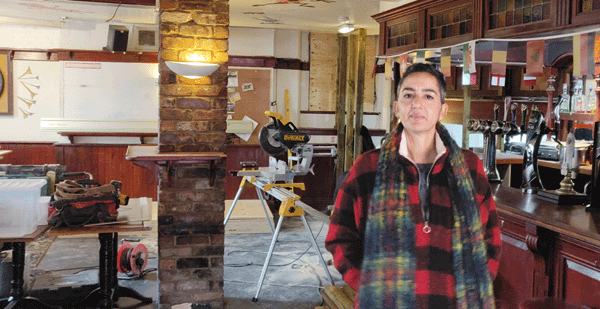 Geetie Singh-Watson MBE is searching through the rooms with Rick who sells reclamation furniture in the Market at the weekend. We are upstairs and the place is a wreck. Rick scans for any items left behind in the building. Geetie claims to be Rick’s best customer and will be using reclaimed and re-purposed furniture throughout the pub with 8 or 9 B&B rooms. She prods crumbling damp walls with an excited air of someone who is going to fix this place. As we stroll through, she finds multiple issues and problems. This is going to require a considerable amount of work and money!

Back downstairs the ladies toilets will be taken out and become an open space as part of this new organic gastropub. The area that used to be home to a pool table will be one of two open kitchen/preparation areas. Geetie has clear ideas of how to make the best of the space. This is her fourth hostelry. “This has got to be a pub. It’s very important to me that this will be a pub“. People can come in just to drink. There will be no obligations to take a table for food. There will be no reservations. If you want to eat, it might be an idea to come early in the evening!

A template for the Bull?

Her last pub was hugely successful Duke of Cambridge in Islington. Claimed to be the first organic gastropub in England it is now part of the Riverford group. She literally waves it away: “I have nothing to do with it now“. Don’t get any impressions that The Bull is anything other that Geetie’s project; “this has nothing to do with Riverford!” she says firmly. She may hold similar principles with the Riverford kingdom but that is purely co-incidental. Sustainable practices are absolutely central to Geetie’s outlook. She was brought up in a commune in Wales and has been dedicated to sustainable living all her life – long before she met Guy Watson. They knew each other for many years through being in similar worlds, but it was on a visit to his farm as a trustee of the Soil Association where she realised “he was quite nice!“. Since then, they married and moved into Baddaford Farm just outside Totnes. Alongside The Bull, Geetie is working with Guy building up the farm where they plan to rear livestock and crops that will be used in the pub. As building works crash on in the background, Geetie tells of her love of old buildings and how they should be restored with care and attention to detail. She recalls her mother Liz, who restored buildings, showing her a brick to see the makers mark, teaching the need for appreciation and respect for the beauty and history of the object. This is clearly how the restoration of the Bull is being approached. 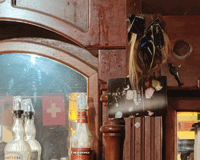 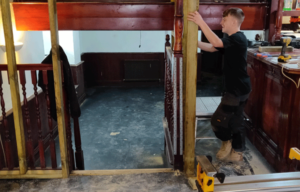 The pool table area – to become an open kitchen area

Don’t hold your breath! The process of re-animating the Bull isn’t going to be quick. It is expected to be re-opening in early summer 2019. Geetie wants the food to be the best it can be. Two local chefs are already on-board. It will be all organic, using ethical farming methods and staff will be paid properly. “The costs of organic food can be very high!  The olive oil we use, for example, is 4 times the price.” Even the heat from the kitchens will be recycled back into the building. However the costs to the end customer will be kept down through being efficient. This might appear to be unsurmoutable but Geetie was awarded business woman of the year in 2008.  If anyone can do it, it would probably be her.

“I want people leaving here feeling happy. That they’ve had great food and paid the right price for it.”

As I’m leaving Geetie notices hair clippings hanging up on display behind the bar – “Ah! That’s fucking gross! What’s that about?“.

There’s a lot of work to be done here but Geetie Singh-Watson is very clear about what she’s doing. My suggestion of having a photo with her pulling a pint is turned down, “Oh, I don’t think so. That’s just not my style!”

A regular at the Bull? Know what the locks of hair are about? Comment below…

No one will tell, the secret of the locks of hair will be burried with the bull ❤

Is that not the scalp of the last Londoner who asked for a decaff skinny latté? 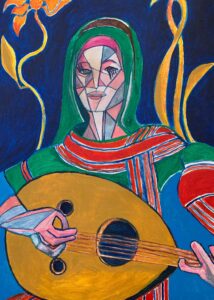