The beautiful twin town of Totnes, Vire in the Calvados region of France have introduced a ground breaking plan to drastically reduce waste and inefficiency by recycling cheese.

The towns forward thinking environmental campaign group, Visionary Village Vire (VVV for short) (Pronounced Veh Veh Veh in french) (The V’s are in a different order in French but it doesnt affect the pronounciation) have set up an ‘armoire communautaire‘ (community cupboard) where locals, at the end of their evening repast, can put unfinished, surplus cheese. At the end of each week, the accumulated dairy product is collected by artisan fromager Claude Mauvais-Oeuf who expertly recycles the donations. 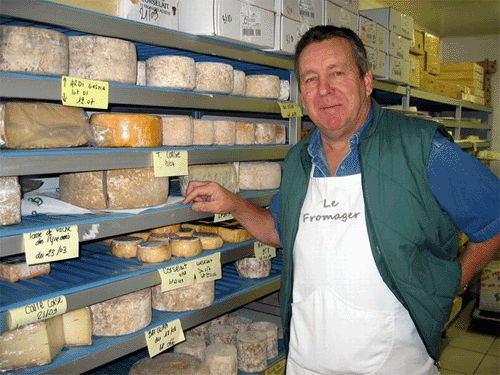 We were lucky enough to catch Claude by telephone and ask him about the process. “So what happens to the items you collect Claude?” We said in our best French.

“Pardon!?“, he replied, so we asked again but very slowly and a little bit louder in English. “Ah! Je vois!” he exclaimed excitedly. “Me and my mistress Claudette, collect le cheese and sort it into the categories no?“. We decided this question to be rhetorical and waited for more. After a minute or so of silence, he continued. “Oui, we then decide, mostly by texture, which cheeses can be merged together, pour example, Brie and Camembert, they are basically the same, so these are pressed into little round wooden boxes with a wooden lid and exported to the UK. Morrisons are very good customers of ours“.  What about harder cheeses such as cheddar we ask. After the sound of someone clearing their mouth of feathers, Claude explains that there isn’t a large market for British cheeses or “…saleté Anglais” as we think he put it.

“…we mostly have the Edam and Gorgonzola and these can be liquidised, mixed with powdered chalk to make that cheese sold in the toothpaste tubes.”

fromage wastage in Vire is down to 11%

Very hard cheeses like Parmesan, Grana Padano and Pecorino Romano can be hardened further by drying and then reformed in a pressure former to make allen keys. “We sell those in England too, through your ‘pound shops‘”. he explains.

Bob Hoskpin of the VVV group tell us that fromage wastage in Vire is down to 11% which since the introduction of the scheme is a whopping 50% of something. He also said the towns’ air quality is much improved with the exception of the 2 meter radius of the armoire communautaire. The trade surplus also amounts to an extra 10% GDP into Vire (although shipping costs and VAT reduce the figure to a final gross of .0045%).

“Why are you asking me all these questions anyway?” Bob asks. On explaining the ethos and community based vision of Totnes Pulse for the town of Totnes, it starts become clear that M. Hoskpin didn’t realise he was communicating with their fine twin town and like all frenchmen, started to talk a little too fast for us to understand fully. “Vous etes voler nos idées“, we think he said but unfortunately the line went dead shortly after, so we couldn’t check.

If there is anyone in Totnes who speaks French, perhaps they can help with translations?