What are they talking about?

Jazz rock band Shadow Factory have joined forces with performance poet Robert Garnham to create an unforgettable show which marries music to spoken word. Based on Robert’s Edinburgh show from 2018, “In the Glare of the Neon Yak” and will be debuted at the Barrel House in Totnes on October 12th. 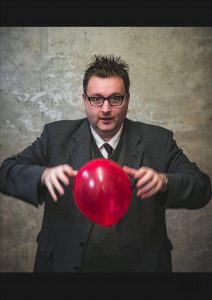 Comedy poet Robert Garnham was chosen by the Telegraph for having one of the funniest lines at an Edinburgh Festival  and recently has been touring the UK with his very popular off-the-wall tea based show ‘Spout!‘. “I first heard a jazz/rock band in Totnes called Shadow Factory a couple of years ago‘, he explains, ‘and I was immediately hooked by their style, their experimentation, their reinterpretation of classic songs and by their wonderful original material. They sound absolutely amazing and they are lovely people.

‘So I was completely blown away when they asked if they could write some original music for my show from last year, In the Glare of the Neon Yak, with a view to live performance“.

Robert and the band have been rehearsing over the last couple of months and creating original music for the show, which they describe as ‘a fantastic journey of poetry and music with a kaleidoscope of colourful characters, reaching a magical destination‘.

Peter Shearn, guitarist from Totnes trio Shadow Factory explains; “We saw Roberts’ show in Torquay and he was using recorded sounds and music during the performance. I felt a live band would be perfect for this scenario and suggested we should work together.” Last year the band were commissioned by the Transition Town Film Festival to compose and perform a live performance to the avant-garde silent film “The Seashell and the Clergyman” in the Totnes Cinema. The show, with Matt Harvey, was a sell-out success. Peter continues, “Working with Robert is a very different experience to writing music for the darkness of that film. This is light, often poignent, and very funny. We’ve spent far too much time in rehearsals, laughing our heads off!“ 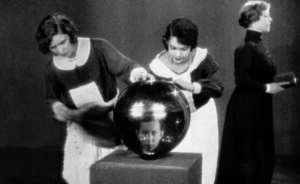 The Seashell and the Clergyman film

According to Robert Garnham, “In the Glare of the Neon Yak” is a riproaring piece of spoken word storytelling set on a sleeper service in the middle of winter. A train full of circus performers are being stalked by a mysterious entity which seems to mean more than just its eerie manifestation. A portent, an omen, the Neon Yak symbolises dark times. Will our hero find love? Will Jacques, the tight rope walker, get back together again with his ex, the circus clown? Does the secret of the Neon Yak lie in the hands of a randy old lady? Has the buffet car run out of sausage rolls? Will Tony the Train Manager find where they’ve put Carriage F? Come along to the Barrel House and find out!’.

Please note some content and language is of an adult nature.

Tickets are £5 in advance and can be purchased here or £6 on the door if the limited seats are still available.

You can find out more about Shadow Factory at http://www.shadowfactory.co.uk/

You can find out more about Robert Garnham at https://robertdgarnham.wordpress.com/