An article about the Free Conversations Movement caught my eye recently, so I had a quick look at the website. I decided not apply to join, but that simple idea of giving anyone the opportunity to have a chat appealed to me and I decided to give it a go on my own. I floated the idea on Totnesians, one of the local Facebook groups, and the responses were overwhelmingly positive, so on Friday 22nd October, shortly after 10:00, I took two chairs and a note, handwritten on cardboard, into town. 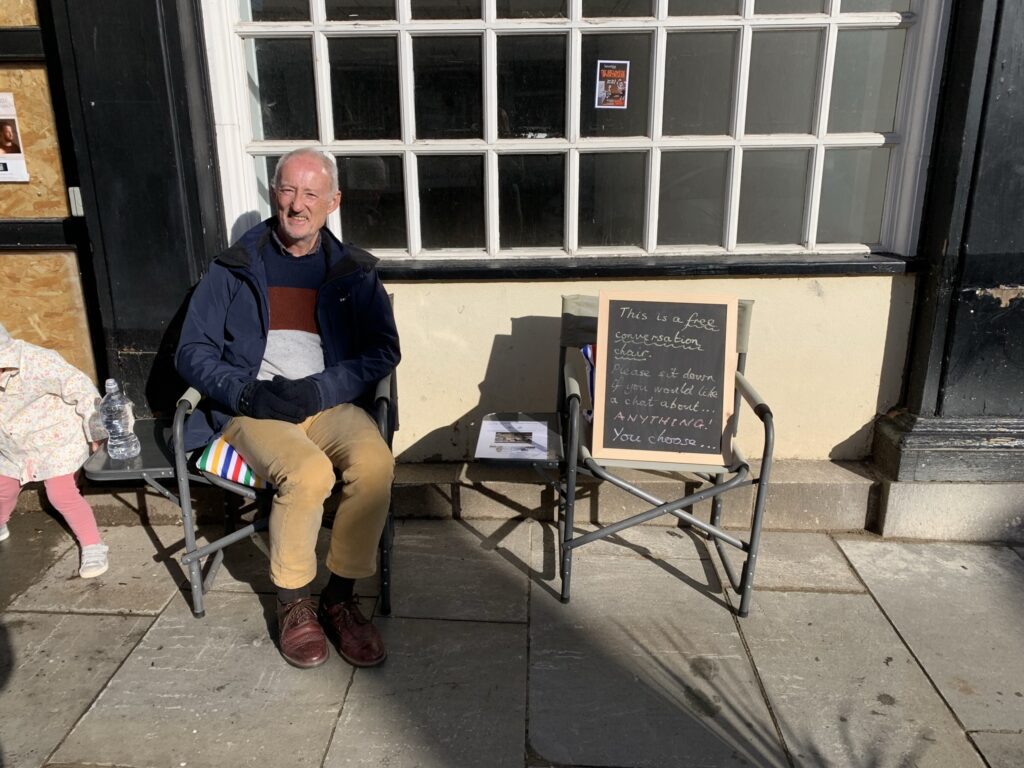 I set up outside the old Peacocks store due to the pavement being wider there meaning that the shop front is set back a little from the road. This meant that there was still sufficient room for people to get past easily, even with a couple of chairs on the pavement. I had no idea what to expect, so I just sat and waited. Sure enough, passers-by started sitting down for a chat. I met some lovely people and had very interesting conversations with each of them. Some, although not all, were happy, the conversations covered a wide range of topics, several others walking past commented on what a good idea it was, and several others said that they would have stopped had they had the time. (My light-hearted response each time was that they should sit down with me to talk about their time management.) After about two and a half hours I had to go home because I was cold, but I was also sold on the whole idea.

has it been worth it?

At this point I feel I should point out that there are several reasons why I consider myself to be in a fortunate position relative to this venture. For example, I am fully retired, and so have the time to be able to commit. I am also naturally confident and so am happy to meet and talk to those whom I do not know. We already had a couple of appropriate chairs, lightweight and foldable, that we use in the garden; a small but important detail. My point is that others might not be in a position to engage as I have in this process for a whole range of reasons. However, if you think that this might appeal to you, I would recommend giving it a go, although there are some further elements that I would highlight.
I try not to be judgemental in any way. I couldn’t set up something like this inviting anyone to have a chat, and then say, “But not you!” I currently have not thought of ways to end conversations, partly because I want to respond rather than to lead, and also because I have not yet needed any such exit strategies. This may be something that I need to develop; we shall see.

One helpful woman suggested that I offer a cushion to make the seat more welcoming, and we already had a couple of cushions lying around (another small but important detail) so I bought a length of jazzy material and ran up a couple of covers. She was right; it made a difference during my second session on the following Friday both to the visual aspect and to our bottoms. I also thought that my sign, handwritten on a piece of cardboard, could be confused with someone asking for something rather than offering without reservation, so I made a chalkboard from some wood that I happened to have at home, painted with chalkboard paint that I also happened to have. I guess the overall message here is that an apparently simple venture still needs a little planning, both conceptually and practically.

All of this leads to a question: has it been worth it? Unquestionably. Today is the fourth Friday in succession that I have occupied my ‘pitch’, I have thoroughly enjoyed meeting and talking to people, the responses have been extremely positive, and I am determined to keep going if the weather allows. Not only have I enjoyed it, I genuinely feel that the conversations have made a positive difference to those whom I have met, albeit more so for some than for others. It would be very rewarding if what I am doing were a catalyst for this to become a more widespread feature of Totnes. I have already heard talk of the Town Council establishing seats in the Civic Square which would enable people more easily to talk to each other due to their positioning, and a lovely woman from The Mansion House suggested I set up in there if it started raining. I am sure that there are many opportunities for others to pick up this baton and run with it. If you do, I hope that your experiences are as positive and life-affirming as mine.

After selling out their last two shows, Abrasive Trees will finally be playing at the New Lion Brewery on Saturday 4th December after lockdown postponed their previously scheduled debut at

After selling out their last two shows, Abrasive Trees will finally be playing at the New Lion Brewery on Saturday 4th December after lockdown postponed their previously scheduled debut at the venue.
Joining them in support will be exciting new Exeter/Bristol four-piece Wish Hounds. Doors open at 7.30pm. Tickets on sale now.
Tickets available in advance from the New Lion Brewery and The Black Bird Collective in person or online from www.wegottickets.com/event/528926

Abrasive Trees
Abrasive Trees have been described as ’stunning’ (BBC Introducing), ‘atmospheric’ (Post-Punk.com) and ‘perfectly evocative’ (Aural Aggravation). Their musical creations display a willingness to experiment alongside a sound that sits loosely within the post-punk aesthetic with definite influences from post-rock, folk and psychedelic-rock.
More accurately though they are the expressions of an inner world that is at times intense, but ultimately hopeful.
Their music connects with themes of the spiritual, the fragility of our psyche, attempts to convey what is ultimately inexpressible – all delivered with irresistible riffs and a powerful mix of distorted cello, entwined guitars and leviathan drums.
“a transcendent experience of euphoric dissonance” – Post-Punk.com
Check out Abrasive Trees: https://linktr.ee/abrasivetrees

Wish Hounds
A Post-Punk/Alt.Pop/shoegaze four-piece from Exeter/Bristol, Wish Hounds have played extensively throughout the South West. They released their debut E.P ‘Onlooker’ in 2018 and recently unleashed a great new single ‘Thoroughbreds’ in August 2021.
Inspired by artists such as The Cure, The Smiths, Depeche Mode and many more, the band’s music evokes romance, whimsy and Old English melancholia, through bittersweet lyrics, shimmering guitars and a driving rhythm section.
‘an amalgamation of twisted guitars and warped yet clean-cut vocals that remind me of late 90’s dark synth pop with a sharp, hard rock edge to bring some added pace. Wish Hounds are a really exciting new band’ On The House
Check out Wish Hounds: http://linktr.ee/wish.hounds

The long-awaited return of The House Double.

DJ Beaton, Keen-EQ and special guest Oogie B bring in a night of proper magical and banging house music, all night long.

Dance until you drop…You know you want to!

All welcome to join this monthly gardening session at the forest garden in Follaton Arboretum. Weather permitting we will be maintaining the

All welcome to join this monthly gardening session at the forest garden in Follaton Arboretum.

Weather permitting we will be maintaining the plants, shrubs and trees there.

Please bring your own gardening gloves and hand tools if you have them, and perhaps a flask of something warm.

Join together to celebrate and hear songs from pioneering singer songwriter Sufjan Stevens’ 10 EPs of Christmas Music. Featuring The Sufjan-Christmas-Pop-Up-Choir led by Katie Whitehouse and Hugh Nankivell, The Aubergines BSO

Featuring The Sufjan-Christmas-Pop-Up-Choir led by Katie Whitehouse and Hugh Nankivell, The Aubergines BSO Family orchestra, singer Chris Cleverley, and a glowing throng of other performers both visiting from afar and cherished locals.

“We’re very excited to be at The Great Hall, Dartington, to share new arrangements we’ve made over the past couple of years since the last live performance of Sufjan’s songs in Edinburgh 2019.” Hugh Nankivell

MUSIC AND MULLED CIDER AT THE BAY HORSE FROM 7.30PM

At St Mary’s Church there will be music, stalls, angels, community banners and refreshments. If you would like a stall/table or the opportunity to play some music on one of these evenings please get in touch with Fr. Jim by e-mail or phone (07775356652 or fr.jim@totnesrectory.co.uk). These sessions will be hosted by Totnes Heritage Trust, Friends of St Mary’s and the Unity in Diversity inter-faith project. Proceeds will go towards the ‘Transform St.Marys’ project. So also a great opportunity to talk about plans for the interior of the church.

China Blue and The Shops at Dartington are open until 8pm

No stalls in the road or road closures

Chris White is a comic poet & submerging artist; a former Bard of Exeter and the host of Spork! Poetry. He often writes about queerness, identity & ducks

Harula Ladd is the sole librarian of the brilliant Postal Poetry Library, the curator of the weekly poem at Totnes Community Bookshop, & a warm, wonderful wordsmith whose work is rooted in community

Sign up on the night for a quick-fire slam competition. 6 poets will compete for a coveted Spork! mug & a cash prize of £50
Each poet will perform up to two poems. Poems must be 3 minutes or less. Anyone can enter; just come along and add your name to the hat.

For any questions, email Chris at sporkpoetry@gmail.com

Fable comes “home” for the first time live, to perform songs from her debut album, Shame, which is set for release in March, 2022.

A 6Music and Radio 2 favourite of the moment, Fable’s music has been hitting the airwaves over the past few months, as she prepares to release her much anticipated debut album. Having been profiled across national media in The Guardian, The Independent, Rolling Stone and Q Magazine, her incendiary live shows are not to be missed.