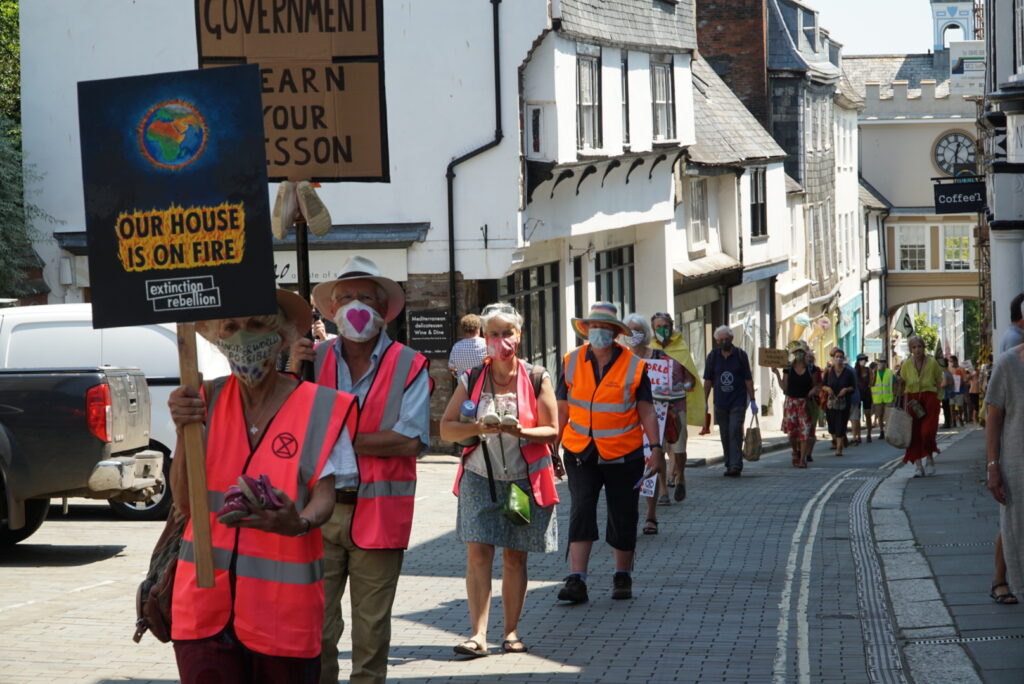 On Thursday 25th June, over 60 people walked up Totnes High Street and each solemnly placed a pair of children’s shoes in the Civic Square. The action, ‘COVID today > Climate Change tomorrow > UK Government Act Now’ was co-ordinated by Totnes and District Extinction Rebellion. In sweltering temperatures, demonstrators marched in single file, socially distanced, each wearing home-made masks, produced for the occasion, many of which bore the slogan ‘A Better World is Possible’.

The event was designed to call on our Government to remember our collective children during the coronavirus recovery, as we face together the even greater challenges of the climate and ecological crisis. The government’s statutory advisory body, the Committee on Climate Change (CCC), had that day published their report, and this action was part of a national day of action by Extinction Rebellion to bring the public’s attention to its publication. The report argued that the government isn’t doing anywhere near enough to reach its own target of net zero carbon emissions by 2050. Out of the 31 milestones recommended by the CCC for 2019 and 2020, the Government has only fully achieved 2 with partial progress being made in just 15.

Among measures called for are a national plan to insulate the UK’s housing stock, a concerted move away from domestic gas boilers to other greener alternatives, a more rapid phase-out of petrol and diesel cars, reskilling and retraining programmes, a huge increase in tree cover, and more money to adapt to the impacts of climate change that are already being felt. The government, they argue, need to act fast and with a far greater sense of urgency.
Extinction Rebellion argue that the CCC report does not go far enough, and the government’s 2050 target puts lives at an unacceptable risk, with only a 50/50 chance, according to the UN, of staying within the Intergovernmental Panel on Climate Change’s recommended target of 1.5 degrees. The 2050 target also presently ignores aviation and shipping, and also the carbon costs of goods imported. According to the World Wildlife Fund nearly half of the UK’s carbon footprint is created overseas, in supplying many of our consumer goods. The group also argue that running through all of these issues is that of social justice, that it is the poorest, the most excluded people, the Global South, and communities in our societies who will, and are already, feeling their worst impacts.The action in Totnes began with a letter being delivered to the offices of Totnes MP Anthony Mangnall demanding that the government act with a renewed sense of urgency and purpose, and calling for various actions specific to the local area. The march then moved up to the Civic Square, and then pairs of children’s shoes, many with beautiful and moving statements from children in Totnes about what they dream of for their future, were placed there.
Lumi, aged 11, wrote: “I’d like to live in a world where we don’t drill into the earth for fuel for our cars and gas cookers and lots more. Where we don’t pollute the sky with aeroplanes. Where we can be contented with living with our close family and friends and not travelling all around the world”. 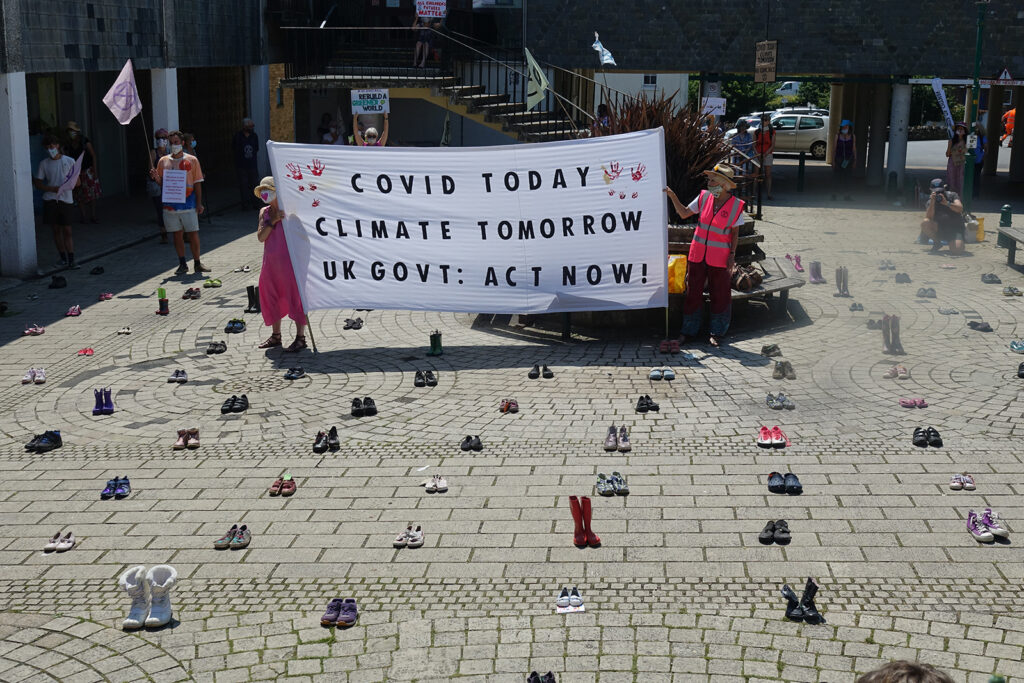 “To stand here and see all these pairs of children’s shoes laid out here in the square is very moving”, said Suzanne Dennis. “These shoes represent the future generations who will inherit the results of the inaction of our leaders today. Their refusal to do what the scientists and their own advisors are calling for is shameful. It is a sad state of affairs when we have to demonstrate to get the government to actually do what it has already promised to do”.
Local mother Azul Thome said “I was holding this tiny pair of pink shoes and I just felt overwhelmed thinking of her future, what would life be like for her even in 10 years”.
“My daughter is expecting my first grandson in August of this year”, said Totnes resident Sylvia Dell, “and my heart is breaking, because by the time he is old enough to wear these slippers, the world will be in catastrophic and irreversible breakdown. If we continue with business as usual, we have to find a new way of living, for the future of every child alive today”. 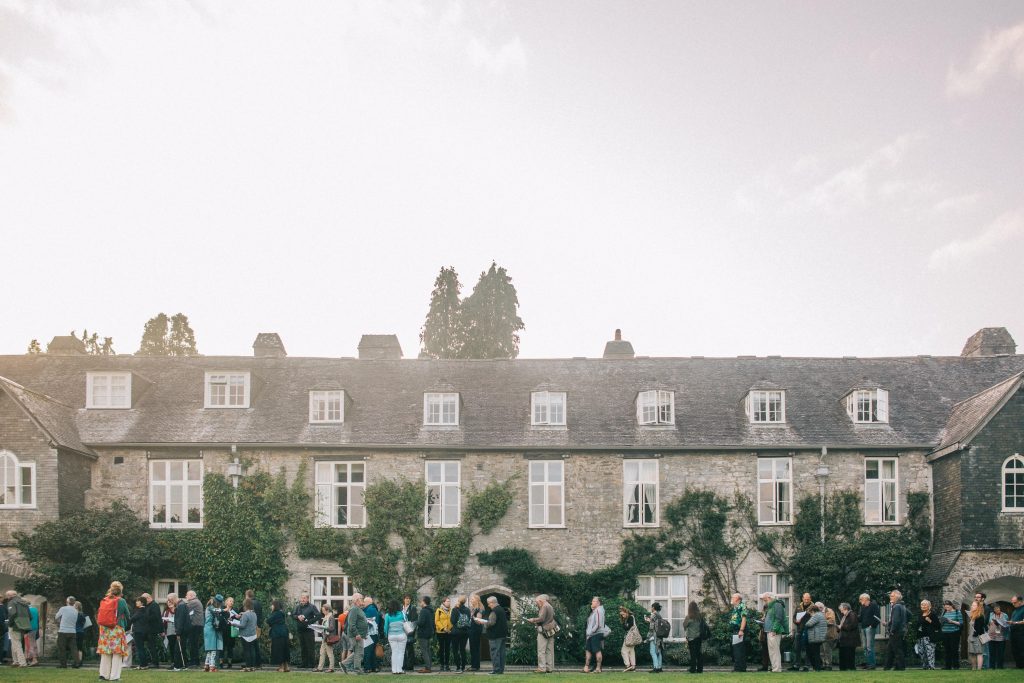 Dartington Music Summer School & Festival is delighted to announce its 2020 course programme, curated by new Artistic Director, Sara Mohr-Pietsch.
The 2020 event promises a transformative summer of shared music-making, bringing together a unique community of amateurs, professionals, audiences and volunteers on the magical Dartington Hall estate.
Sara Mohr-Pietsch was announced as Artistic Director last year, adding to her significant career as a BBC Radio 3 broadcaster and writer. Her programme will open up the worlds of classical, folk, jazz and experimental music to a wider audience than ever, with a huge array of courses and workshops on offer for all ages and abilities, taught by an impressive line-up of international performers, composers and writers.
Mohr-Pietsch’s first programme boasts several new elements to broaden participation and engagement. A new strand of work, Future Sounds, will bring writers and radio-makers together to open up a conversation about music. A strong commitment to new work will see composition teaching introduced in each of the four weeks, and two major works commissioned for community choir. Dartington will also team up with a host of national partners in 2020, including Café OTO, Royal Philharmonic Society, The Nest Collective, CoMA and Soundart Radio, to enrich the Summer School experience and invite the wider world in.
Creating a family-friendly atmosphere is an essential part of Mohr-Pietsch’s direction, and the 2020 programme includes Dartington’s first-ever short course for parents and children, as well as a week-long children’s choir, and one-off music workshops for infants.